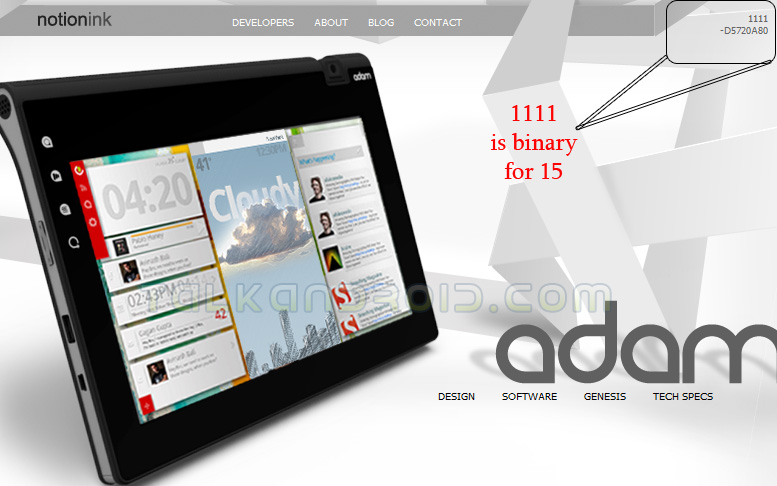 The hardware looks like the images we’ve seen. The device looks slightly thicker than I expected, but overall it looks slick, and certainly stacked with slots. From what I saw, on the left edge is a USB port and what looks like an SD card slot. On the right edge is what looks to be the screen switch (to either turn off the LCD screen, or swtich between LCD and eInk on the Pixel Qi,) an HDMI port, another USB port, and what could be the volume rocker. Again, all of these things match up with the images and specs we have seen on the Notion Ink website.

The Eden system looks like it took quite a few tricks from Apple’s Cover Flow, and looks like it would be a wonderful solution to the fact that current Android apps aren’t optimized for tablets. Unfortunately, Notion Ink has confirmed that the Android Market will not be shipping on the device. Rohan said that the Adam should get the Market along with the Honeycomb update, but until then, users will have to make do with the apps provided in the proprietary Genesis market. I’ve e-mailed Rohan regarding the exclusion of the Android Market, but have yet to hear back.
The launcher UI looks interesting. It brings up a ribbon across the center of the device with a single line of app icons. This could get a bit annoying if you have a lot of apps, but in the video it looks good. The Maps/Navigation app was actually a bit disappointing. When it first shows up, the video says, “Eden comes with on device vector maps. (Included only from Honeycomb on Android devices.)” This is confusing, first because of the phrase “on device”, which could either mean that the vector data is stored on device, or is processed on device. The new Maps 5 processes vector data on device, but it is available on all Android 2.0+ devices, which makes the “included only from Honeycomb” comment confusing. The disappointing part of the Maps is the checkerboards that show up when zooming out on the map. On WiFi, my Nexus One doesn’t even do that unless I pan across the state, and the Adam is supposedly a Tegra 2 powerhouse. This could be due to unfinished software optimization, but it’s still disconcerting. The video goes on to show the full screen browser, copy-paste functions and even using a USB mouse in the browser.

Now, let’s talk a bit about what the video doesn’t show. It doesn’t show anything that distinguishes it as an Android device. There is no notification bar, no unlock screen, and obviously no Google Apps. It didn’t show any sort of homescreen. This was the Eden paneling system and that’s it. The video is about 5 minutes of actual demo, and a good half of that is just sliding the panels back and forth, and back and forth. We saw very little from the apps that would make this an appealing experience. In fact, the video only showed 3 full screen apps: maps, browser, and PDF viewer. A tablet experience is fundamentally different from a phone in the size. If each app lives in a panel the size of a phone screen, what’s the point of the tablet?
On top of that, there was no demonstration of the Pixel Qi screen. It is unclear if the version in the demo video is a plain LCD screen or the Pixel Qi. Either way, the touchscreen sensitivity looked good, although there were a couple times when the hard function buttons didn’t work on the first press. There was also no demonstration of the camera, aside from swiveling it once. There was also no demo of the vaunted audio system, of which Rohan has been so proud.
Overall, it was good to finally see the Adam in action, but the video has still left a lot of things to be desired for me. Most notably, I want to see the Pixel Qi screen in action, and I also want to see more full screen apps in action. The Eden paneling system looks slick, but that system doesn’t make a lot of sense without the Android Market. The paneling system is a way to incorporate apps that weren’t designed for a tablet screen. In absence of those apps, why create your apps in a way that doesn’t take advantage of the device you have? I understand that the Eden system also does well for quick access to small tasks, and multitasking, but that should be a support system behind the full screen apps. Perhaps it is just this demo video, but that is not the impression I’ve gotten. I do look forward to seeing more from CES

December 30, 2010
Katie Stanton, International Strategist for Twitter Katie Stanton has impressively long names of companies in her resume. They include the White House, Google Inc, and her latest addition is Twitter. Her remit is working on Twitter’s international strategy and her experience in social media will be a key asset to the company. Katie has a history of working in technology, and her knowledge of departmental laws will help Twitter work alongside government agencies, as she’ll be spearheading the free information approach, especially after the Wikileaks incident. Stanton has been a key player in the techsphere for some time, and this extends to her private life. Following the Haiti disaster she worked with a group of engineers to create a free texting service to help those in need and she is constantly in demand as an expert in both social media and government policy.
Caterina Fake, Co-Founder of Flickr and Hunch Despite having a surname which sounds like a pseudonym for a spy (it’…
22 comments
CONTINUE READING THIS POST..........